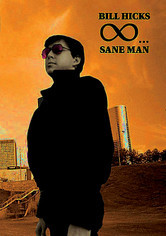 1989 NR 1h 24m DVD
Just before his death in 1994, pitch-dark comedian Bill Hicks was celebrating a turning point in his career, due mostly to his newfound sobriety. Filmed in 1989, this rare onstage performance captures Hicks spouting off on a variety of topics. Sober? Yes, but not without that trademark edge. Extras include previously unseen footage from Hicks's "outlaw" years in Houston, plus a bit featuring the comic in a full-blown Elvis suit.