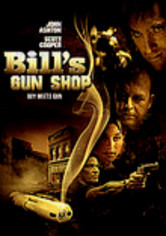 2001 NR 1h 37m DVD
Dreaming of becoming a Hollywood action star, all-around nice guy Dillon McCarty (Scott Cooper) gets a job at Bill's Gun Shop and winds up in real danger in this fast-paced drama. Surrounded by racks and racks of pure firepower, Dillon finds the courage to join a real bounty hunt. But the adrenaline-rush adventure turns into an explosive nightmare and the 23-year old is faced with impossible odds. John Ashton and Tom Bower co-star.