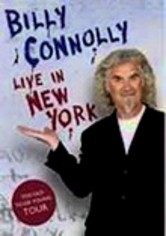 2005 NR 1h 32m DVD
In this live performance filmed at New York's Town Hall in February 2005, Billy Connolly delivers the outrageous brand of comedy that's sustained his successful stand-up career for more than 30 years. With a huge international fan base, the hilarious Connolly releases his brazen observational humor with shocking honesty and Scottish flair in the Big Apple. This marks his first filmed concert in America.