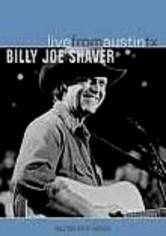 1984 NR 0h 47m DVD
After making a name for himself as a central figure in the 1970s country "outlaw" movement by writing songs for other artists, Billy Joe Shaver finally launched his own performing career. In this 1984 concert filmed for the "Austin City Limits" television series, Shaver shines on classic tunes such as "Black Rose," "I'm Just an Old Chunk of Coal," "Old Five and Dimers Like Me" and his biggest hit, "Georgia on a Fast Train."