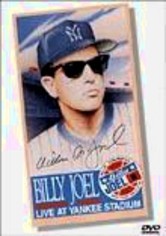 1990 NR 1h 25m DVD
Jumpy, handheld camera work and quick-cut editing punctuate this concert recorded in 1990 during Billy Joel's performance at Yankee Stadium on the Storm Front Tour. In addition to songs from the "Storm Front" album, Joel showcases such classics as "Scenes from an Italian Restaurant," "Miami 2017," "I Go to Extremes," "Pressure," "We Didn't Start the Fire," "A Matter of Trust," "The Downeaster Alexa," "New York State of Mind" and "Piano Man."