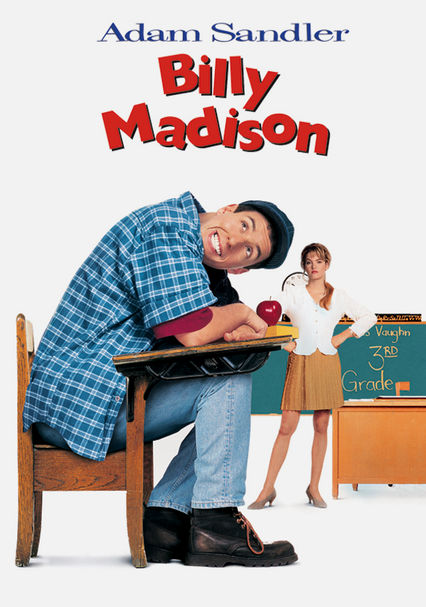 1995 PG-13 1h 30m DVD
Job-averse goofball Billy Madison stands to inherit a fortune when his hotel magnate father retires and leaves him in charge. But Billy's dad won't trust him with the family business unless he goes back to school. All the way back.

Parents need to know that Billy Madison is a 1993 movie that launched the post-SNL career of Adam Sandler. The immature humor is full of sex jokes and innuendo that's targeted toward teenagers; for example, Billy is excited because it's "nudie magazine day," where he receives magazines with titles like Drunk Chicks. An older maid makes continuous sexual advances at the protagonist (including a request to take her shirt off for him). There is lots of profanity throughout the film, including "f--k," "s--t," and use of the word "retarded." The film contains some scenes of binge drinking. Billy is often hazed by the bullies of each grade he attends. Rude behavior rules. The ending features a positive message of accomplishment and resilience.

Sexual innuendo. The lead character is excited because it's "nudie magazine day;" he goes to the mailbox and takes out magazines with titles like Drunk Chicks. His teacher and eventual love interest helps him study by quizzing him on questions and removing an article of clothing each time he gets a question right; she does not get undressed. Billy and his friends ask each other the question, "Who would you rather bone?" concerning two famous people. Billy draws his teacher in a suggestive pose with the caption, "Do me, Billy!" His principal gives him a valentine that reads, "I'm horny!" In the tent where Billy studies, his bathroom is covered in pictures of naked women (not clearly seen), with speakers that make noises like women having orgasms. The man in charge of asking the questions during the "Academic Decathlon" continually refers to his wife's cheating on him and refers to her as a "tramp."

In a high school auditorium, a character pulls out a gun and starts shooting. He is shot at by another character armed with a rifle and scope. A clown seems to fall to its death at a party. A station wagon full of a family of bullies spins out of control and goes off a cliff.

The main character is an unmotivated heir to a hotel fortune who must learn to apply himself in order to succeed.

Some binge drinking involving Billy and his friends, causing Billy to see a hallucination of a penguin.