Billy Martin: The Man, the Myth, the Manager 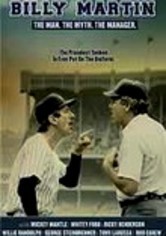 Billy Martin: The Man, the Myth, the Manager

2007 NR 1h 5m DVD
An emotional tribute to Billy Martin -- a five-time manager of the New York Yankees in the 1970s and '80s -- this program combines game clips and on-camera interviews, including one with Martin recorded shortly before his untimely death in 1989. Footage features an all-star lineup of Major League Baseball personalities, including Mickey Mantle, George Steinbrenner, Rickey Henderson, Whitey Ford, Willie Randolph and Rod Carew.