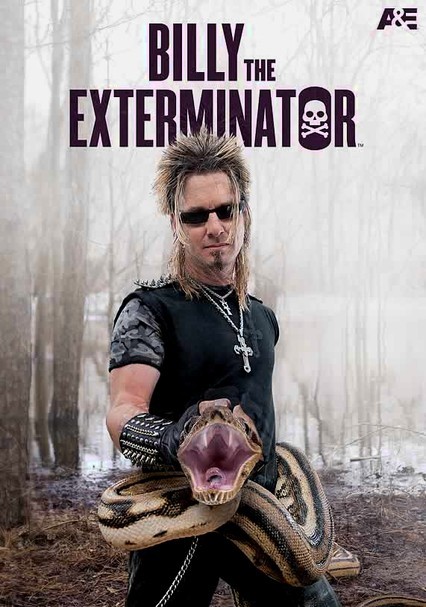 In the second season of this reality series about Billy "The Exterminator" Bretherton and his Louisiana-based bug and pest removal business, a rattlesnake invades a funeral home and Billy hits a golf course to take care of a little gator problem.

Parents need to know that atlhough the family at the center of this reality series about a Louisiana pest control business has a Goth-like persona (the company logo is a skull and crossbones), the show is fairly mild -- and animal friendly -- overall. That said, the series does include some family drama, which leads to a few catty arguments and occasional "bleeped out" swearing (like "s--t"). Food and tool product logos are sometimes visible, and some of the pests being removed (which range from cockroaches to alligators) resist rather violently.

Billy and the Vexcon company try to avoid killing animals when possible, but it's sometimes necessary (the company's logo is a skull and crossbones). Snakes, alligators, and angry raccoons violently resist removal. Billy sometimes uses scary gothic masks when he's removing bees and other critters, but his additional attire (like feather boas) makes it more funny than frightening.

Audible language includes occasional use of words like "hell." Rare swear words like "s--t" are sometimes said during heated arguments, but they're fully bleeped.

When possible, animals are rescued and relocated. Billy also promotes the use of more human-friendly methods for pest removal. There's some drama among the family members/co-workers.

The series is a promotional vehicle for the Vexcon Company. Some of Billy's non-traditional techniques require the use of food products like Oberto beef jerky, while mice and roaches enjoy products like Jell-O. DeWalt tools are visible. Billy drives a Dodge truck.