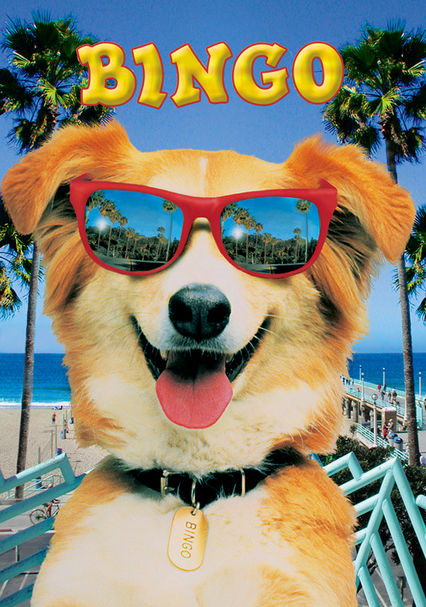 1991 PG 1h 29m DVD
Chuckie forms a bond with Bingo, a dog who ran away from the circus and his cruel master. But when his family moves, Chuckie's parents refuse to allow Bingo to come with them. Bingo then begins a cross-country odyssey to find Chuckie.

Parents need to know that Bingo is a 1991 movie about a gifted dog who travels on paw from Denver to Green Bay to be reacquainted with his master. It's a painfully unfunny comedy filled with inappropriate behavior from both humans and dogs. Bingo escapes a circus as a woman shoots a rifle at him. The tween boy who adopts Bingo curses ("s--t"), gives his brother the middle finger, and looks at a pornographic magazine. Bad guys put a gun to Bingo's head and threaten to shoot. A father slips in dog excrement. A cook walks around his kitchen, where there are many caged dogs; he makes reference that the secret ingredient of his hot dogs is dog meat. For dog lovers (or animal lovers in general), there are so many questionable -- if not outright offensive -- moments that it's difficult to imagine how this movie was made.

A tween boy looks at a pornographic magazine. The titular dog spends time in the doghouse of a female dog; romantic music plays and a bottle of champagne rolls of the doghouse.

A man threatens to toss a dog into a rucksack. A woman shoots a rifle at a dog. A boy nearly drowns in a creek after crashing his BMX bike. A chef walks around menacingly with a machete around a group of caged dogs, and makes reference to using dog meat to make hot dogs. Police fire guns and rifles at a pair of bad guys. A dog is held hostage; one of the bad guys puts a gun to his head. One of these same bad guys also pulls a gun on a little girl. A dog attacks the groin area of one of the bad guys. A group of prisoners pull out knives and threaten to attack each other.

Lots of inappropriate behavior and content; no positive messages.

The father is a place kicker -- first for the Denver Broncos, and then later for the Green Bay Packers; memorabilia for both teams is prominent in almost every scene. Characters eat Kentucky Fried Chicken and sit in a trailer surrounded by empty cans of Coors Beer.

A dog, after drinking a bottle of champagne, passes out on the road and blocks traffic. A police officer has him walk a straight line. Two bad guys are in a trailer surrounded by empty cans of beer.