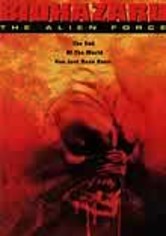 1995 R 1h 28m DVD
Steve Latshaw's creepy thriller examines what happens when a scientist conducts an experiment beyond his usual expertise. His exploration into genetics results instead in the creation of a monstrous creature that lives off human spinal fluid. It's up to a government agent and a journalist to hunt down the mutant and determine a way to put a stop to it before it's too late. Stars Steve Zurk, Chris Mitchum, Susan Fronsoe and Tom Ferguson.