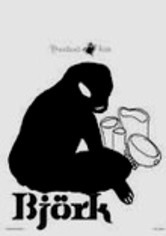 1993 NR 1h 30m DVD
Daring vocalist Björk is unafraid to explore new musical territory, and her best discoveries are collected in this anthology of music videos that show her range and depth, from the heavy dance beats of "Hyperballad" to the dark tones of "Army of Me." Exemplifying Björk's commitment to strong visual storytelling, the videos assembled were directed by such famous names as Spike Jonze and Michel Gondry.