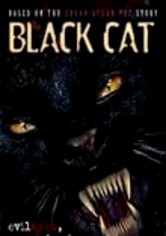 2006 R 1h 28m DVD
In this eerie thriller based on Edgar Allen Poe's classic short story, the eyes of a black cat haunt the psyche of a man accused of foul play when his wife and son mysteriously vanish. Though he's stumped for an explanation regarding their disappearance, can Det. Eleanor Wyman's searing cross-examination coax the truth from her tormented suspect? The film's cast includes Stephanie Leon, Shaun Kurtz, Philip Jones and Shawna Erickson.