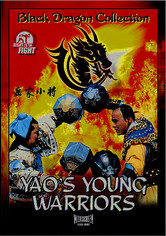 1983 NR 1h 29m DVD
Cham Fung, Cheung Hei Ling and Cheung Shing Chung star in this martial arts film set in China at the end of the Sung Dynasty. Determined not to surrender to the Chin army, General Yao and his men retreat to a mountaintop. The general's five grandsons, who are superior spear-wielding fighters, rally the troops and fend off the enemy. Both sides kidnap family members of their enemy, resulting in the need for negotiations amidst the fighting.