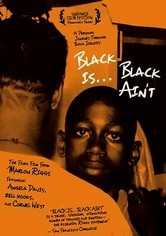 1994 NR 1h 27m DVD
In this stirring documentary, director Marlon Riggs shines a light on traditional black stereotypes -- even those held within the African-American community -- and offers a new take on "blackness" itself. Released the same year Riggs died from AIDS, the film also examines homosexuality and includes penetrating commentary from leading black voices such as bell hooks, Angela Davis and Cornel West.