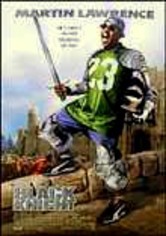 2002 PG-13 1h 36m DVD
With a bump to the head, Jamal Walker (Martin Lawrence) finds himself transported from his job at a medieval theme park to the real Middle Ages, where he teams with ex-knight Sir Knolt (Tom Wilkinson) and chambermaid Victoria (Marsha Thomason) to take out the evil King Leo (Kevin Conway). The hilarity begins as Jamal clashes with Leo and his henchman, who've stolen the throne from Queen Victoria (Helen Carey) in director Gil Junger's comedy.

Parents need to know that this movie has very salty language for a PG-13, including a slightly obscured but very strong four-letter word. In addition to the violence mentioned above (mostly comic and bloodless, but with real injuries and deaths), there's a beheading. There are a number of sexual references and situations, including a discussion of "French" kissing, characters making sounds so that people nearby will think they are having sex, and a man who has sex with a woman because he thinks she is a different woman. Minority and female characters are smart and brave (though not always seen that way by others).