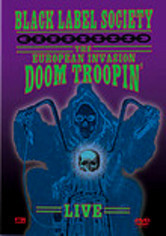 2005 NR 3h 40m DVD
Get ready for the loudest riffs and heaviest distortion solos when Black Label Society, the creation of guitar legend Zakk Wylde, take the stage during their sold-out European tour. Hit the road with the band and watch the entire mind-blowing Paris show, as well as four tracks from the Astoria in London. Bonus features include a behind-the-scenes documentary, three promo videos from the "Mafia" album and the making of the video "Suicide Messiah."