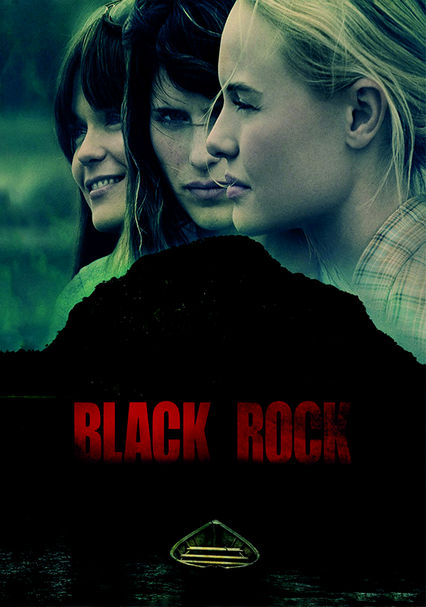 2012 R 1h 23m Blu-ray / DVD
Childhood pals Sarah, Abby and Lou's reunion on a remote island off the coast of Maine turns into a nightmare when they realize a sinister neighbor doesn't appreciate their presence -- and they wind up fighting for their lives.

Parents need to know that Black Rock is a horrific thriller about men stalking and trying to kill three female campers -- and the women turning the tables. It's exceedingly violent, with attempted rape, brutal treatment of women, various attacks and murders, and tons of blood. Two of the women appear fully naked for a long scene (breasts and behinds are seen), and there's some flirting and sexual innuendo. Language is very strong, with "f--k" used in virtually every sentence spoken. "C--t," "p---y," and "a--hole," are also said. And there are scenes in which characters intentionally drink to get drunk. While there are interesting ideas about prey becoming predator and women empowering themselves, Black Rock is so brutal that these messages aren't likely to be the primary thing that viewers take away from the movie.

Two female characters strip off their clothes after swimming in freezing water. They're fully naked onscreen for several minutes, though they're shown huddled together, covering up certain body parts, as well as in the darkness of the woods. But naked breasts and behinds can clearly be seen. A female character also flirts very heavily with a male one, and there's some general sex talk.

Very strong, primal violence against women (and men), with lots of blood and several dead bodies. Women are punched, dragged, tied up, and then stalked through the woods. There's an attempted rape scene, which is stopped when the would-be rapist is bashed in the head with a rock. Characters are shot in the head, stabbed with knives and sharp sticks, and throats are slashed. There's even biting, with great streams of blood.

The movie has some interesting ideas -- mainly about prey becoming predator and about women empowering themselves -- but it's so brutal that these messages aren't likely to be the primary thing that viewers take away from the movie. Plus, another message is that of revenge and killing to solve problems.

Characters drink whisky while camping on an island and are shown overindulging, drinking with the intention to get drunk. But all drinking ends and is no longer an issue after the first 30 minutes.