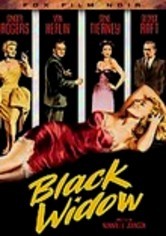 1954 NR 1h 35m DVD
With his wife out of town, Broadway producer Peter Denver (Van Heflin) lets the naive young Nanny Ordway (Peggy Ann Garner) stay in his luxurious penthouse apartment. When the girl turns up dead, Peter becomes a prime suspect and must find a way to clear his name. Ginger Rogers co-stars as Lottie Marin, a high-maintenance Broadway actress whose husband (Reginald Gardiner) was also involved with the victim.