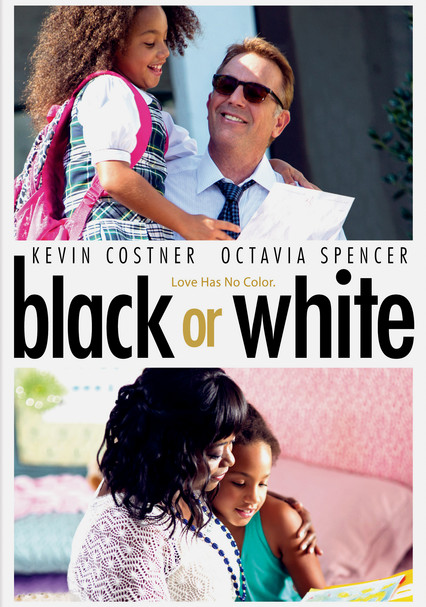 2014 PG-13 2h 1m Blu-ray / DVD
Still reeling from his wife's death, Elliot Anderson struggles to maintain custody of his biracial granddaughter when her grandmother begins pushing to have the girl sent back to her father -- a crack addict Elliot blames for his daughter's demise.

Parents need to know that Black or White is a drama about race and family -- and also alcohol and drugs. It's flawed but thoughtful, and it tackles some extremely complex, difficult issues, making it a jumping-off point for discussions about tolerance, racial relations, and more. The main character is a very heavy drinker (to the point of alcoholism), and a supporting character is a drug addict (he's briefly shown smoking crack). Language isn't very frequent but includes one use of "motherf----r," as well as the "N" word. Arguing and tension is strong throughout, culminating in a rough fight scene that involves a knife and a blunt object. A character also falls into a pool cover and nearly drowns. Sex isn't really an issue; the main character has flashbacks to his late, beloved wife, and a secondary character is seen being affectionate with a younger girlfriend.

A secondary character is affectionate with his girlfriend. The main character has flashbacks about his late, beloved wife.

A rough fight scene. A man draws a knife. A man is hit with a blunt object. A man falls into a pool cover and nearly drowns. General tension, shouting, and arguing throughout.

One major use of "motherf----r." Occasional use of other strong words, including the "N" word.

Complex themes/messages related to racial issues and relations. Tolerance is promoted, and the idea of looking beyond skin color is a main theme. Family is also cherished.

The main character is a heavy drinker, possibly an alcoholic. He drinks a specific brand of whisky and is frequently drunk or hung over. A secondary character is a struggling drug addict. He's shown smoking crack in one brief shot.