Blade of the Immortal: Vol. 3 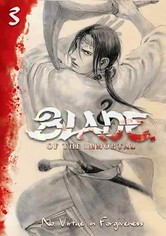 Blade of the Immortal: Vol. 3

2008 NR 1h 40m DVD
Some view immortality as a gift. But for Manji, it's literally a curse that was thrust upon him by a nun who wanted him to pay for the horrible things he'd done in his life. To end his ageless reign, he must now kill 1,000 of the world's worst men. It's a daunting task that not only requires him to murder many times over but also asks him to roam the country in search of the next victim on his list. Volume 3 contains episodes 10-13.