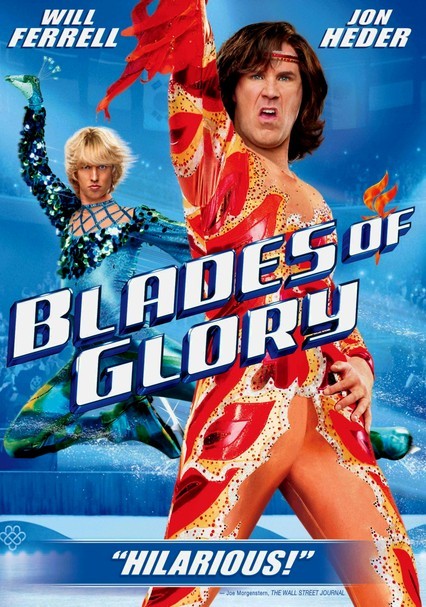 2007 PG-13 1h 33m Blu-ray / DVD
When a much-publicized ice-skating scandal strips them of their gold medals, two world-class athletes skirt their way back onto the ice via a loophole that allows them to compete together -- as a pairs team.

Parents need to know that this Will Ferrell comedy has lots of verbal and sight jokes about sex, homosexuality, drinking, and drugs. There are goofy-but-sometimes-violent physical gags (like a decapitation that features obvious use of a mannequin and fake blood) and ads for sponsored products. Characters fight, get cut by skate blades, shoot harpoons (one hits a mascot in the head and scares screaming children), and do some painful-looking stunts on the ice (splits, falls, ice burns). Figure skating's foppish reputation is skewered repeatedly, with over-the-top spandex costumes, poofy hair, make-up, and histrionic ice dancing. It's especially evident when the two main characters team up to form a spandex-clad male-male pair who hold hands, perform lifts, and accidentally grab and kick each other's crotches. Language includes repeated uses of "sucks," "damn," "s--t," and "ass."

Chazz's early "sex on ice" performances include choreographed crotch grabs and pelvic thrusts; he also licks a fan's face and intimidates Jimmy with sexual bravado (mouthing "I want you," etc.); references to "classic Euro-porn" and Chazz's Adult Film award; a woman wears a sexy corset to seduce a man; lots of crotch grabs and reaction shots to indicate discomfort or arousal; discussion of lyrics in the song "My Humps; Jimmy's stalker fan makes repeated bizarre sexual/romantic comments; discussion of Chazz's conquests includes him saying that he "tapped" Michelle Kwan.

Awards ceremony fight leaves faces bloodied; another comic fight involves punching, kicking, and body-tossing; Jimmy's slide across the ice on his chest produces a visible burn; Jimmy is handcuffed to a toilet; a rival shoots at Chazz with a harppon, accidentally hitting the mascot in the head and frightening children.

Sex jokes are homoerotic and homophobic; skaters are fierce, devious, and violent rivals ... then Chazz and Jimmy learn to be nice.

Chazz is drunk during his performance in an ice show for kids (drinking, vomiting, slurring his words); mention of Quaaludes.