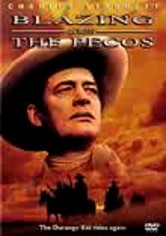 1948 NR 0h 54m DVD
Hired by Marshal Smiley Burnette (Smiley Burnette) to bring peace and justice to the small town of Pecos Flats, The Durango Kid (Charles Starrett) heads out to bring in the villains. After being attacked and left for dead, The Kid discovers that the mayor (Charles Wilson) is arming local Native Americans to run a rival out of town. The Kid prevents the mayor's planned attack and sets up a ruse of his own to catch the corrupt official in the act.