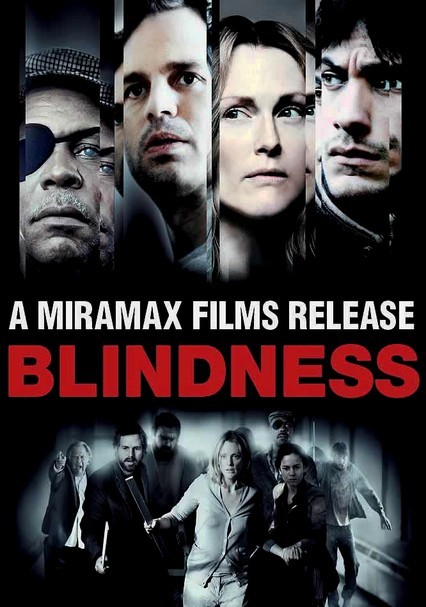 2008 R 1h 58m Blu-ray / DVD
When a plague of blindness overtakes an entire city, all sense of order breaks loose in the hospital where the victims are being quarantined. Now, it's up to a woman who's keeping her sight a secret to lead a group safely to the streets.

Parents need to know that this bleak drama -- which depicts the total breakdown of society (including filth, squalor, graphic brutality, and sexual coercion) in the wake of a plague that leaves its victims blind -- isn't for kids. Several scenes depict the aftermath of the social collapse, including the absence of law and order, medical treatment, food and shelter, and more. There are also several sex scenes -- some of which are consensual, and some of which aren't -- and a good deal of strong language. Violence includes beatings, shootings, and much more.

Extensive sexual and nonsexual nudity (including both male and female full frontal, from a distance); a prostitute visits a client in a hotel room; consensual sexual activity on screen; sex is bartered for food in the aftermath of a devastating plague.

Extensive depiction of social breakdown in the wake of a disease that strikes its victims blind -- including riots, quarantine, and armed suppression of blind civilians. As the plague effects the entire populace, civilization descends into chaos, squalor, and filth. A group of quarantined victims set up a tyranny under rule of force, telling other inmates that they'll only receive food in exchange for their remaining valuables, and, later, sex. A man who was blind before the sickness assists this tyranny.