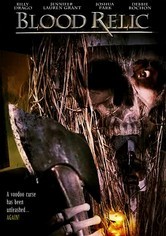 2005 R 1h 26m DVD
Shortly after finding a magical ancient artifact, Navy pilot Hank Campbell (Billy Drago) goes insane and murders his fellow fliers -- but not before hiding the powerful object somewhere in the plane. Twenty years later, an air museum exhibit coincides with Hank's release from a mental institution. With the aid of the recovered talisman, Hank's intent on exacting voodoo vengeance on the people who put him away. Debbie Rochon co-stars.