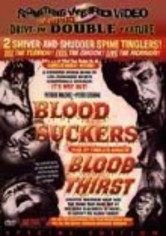 1972 NR 2h 34m DVD
In this vampire double feature, an Oxford professor falls in with a coven of blood-drinkers while vacationing in Greece (in Blood Suckers), and investigators try to catch a bloodthirsty killer roaming the streets of Manila (in Blood Thirst). In the first film, Richard tries to get his girlfriend to join a sexy vampire cult. In the second, an American tries to help a Filipino police captain catch a serial killer who drinks his victims' blood.