Blood and Oil: The Middle East in World War I 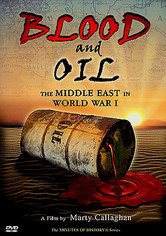 Blood and Oil: The Middle East in World War I

2006 NR 1h 52m DVD
The events of World War I that laid the groundwork for today's conflicts in the Middle East are detailed in this fascinating history. After the 1918 demise of the Ottoman Empire, the Treaty of Versailles paved the way for political instability in the region. At the same time, Western powers took note of the area's rich oil reserves, initiating a campaign of economic, diplomatic and military intrusion that continues to this day.