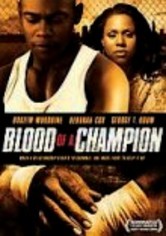 2004 NR 1h 30m DVD
After spending a decade in prison, Shadow (Bokeem Woodbine), an amateur boxer, yearns to take to the ring once again. But the only option he has is to enter the dangerous world of underground street fighting, which incenses the local police and prompts Shadow's disapproving wife (Deborah Cox) to force his hand. Which of his passions will Shadow ultimately choose -- his illicit career or his marriage? George T. Odom co-stars.