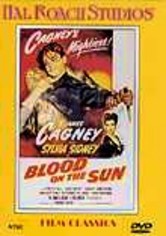 1945 NR 1h 38m DVD
Nick Condon (James Cagney) works the newspaper beat in Japan in the era between the world wars. While investigating the murder of a fellow reporter and his wife, Condon discovers the infamous Tanaka Plan (a real-life document), which delineates the Japanese plan for domination of the Far East -- including a planned attack on Pearl Harbor! Condon must elude the secret police with the help of Iris (Sylvia Sidney), a beautiful Chinese-American spy.