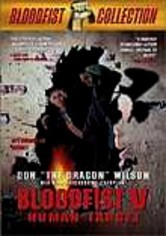 1993 R 1h 24m DVD
Jim Stanton (kickboxing champ Don "The Dragon" Wilson) is a federal agent on the trail of a nefarious arms smuggler and some stolen plutonium. But after Stanton is shot in the head and loses his memory, he finds himself at odds with both the Chinese mob and his own federal agency. Now, it seems he has plenty of enemies to deal with, but only one trusted ally -- his girlfriend, Candy (Denice Duff).