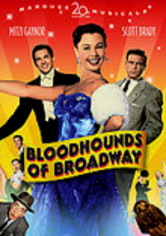 1952 NR 1h 30m DVD
When a bookie on the run (Scott Brady) falls for a pretty country songbird (Mitzi Gaynor), he'll do anything to help her make it big -- including a stint in jail to pay for his crimes. But will the tough guy's sacrifice of the heart pay off when it comes to his girlfriend's singing career? Watch for a young Charles Bronson playing a waiter in this snappy musical comedy based on several Damon Runyon short stories.