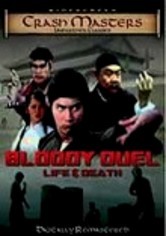 2007 NR 1h 35m DVD
When a kung fu master is killed by marauding Japanese invaders, a ragtag group of Chinese warriors sets out to avenge their leader's death in this digitally remastered edition of a martial arts classic. The action heats up as the Chinese gang -- an acrobat, a boxer, a drunk and the dead master's top students -- attempts to oust the Japanese enemy. Feet and fists fly in this blood-drenched battle to the death.