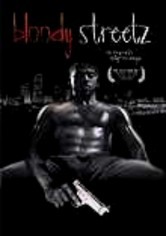 2003 R 1h 23m DVD
His son killed in a bloody drive-by shooting, Black (Gano Grills) is despondent and out for revenge. He embarks on a series of crimes, one more violent than the next. But living by the gun fails to extinguish his anger at his son's death. When he falls for Semaji (Kalimi Baxter), Black discovers that love is a weapon more powerful than ammunition against the isolation of pain and fury.