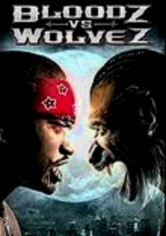 2006 NR 1h 24m DVD
As if ordinary gang warfare weren't enough to contend with, the cops really have their hands full when rival supernatural gangs do battle on the streets of New York City in this direct-to-video horror flick. It's the ultimate showdown as the upstart werewolves from the 'hood start a turf war against the well-fixed vampires who own downtown -- and the winners will reign for eternity. The cast includes Malik Burke and Kandiss Marie.