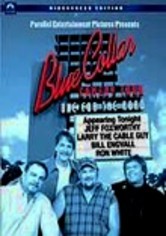 2006 NR 1h 48m DVD
Striking a chord with audiences everywhere in 2000, the Blue Collar Comedy Tour -- featuring Jeff Foxworthy, Larry the Cable Guy, Bill Engvall and Ron White -- became one of the most successful comedy tours ever, grossing more than $15 million. Now, stocked with a cooler full of good ole boy jokes (and plenty of Pabst Blue Ribbon), the comics are hitting the road once again to unleash their unique brand of redneck humor.