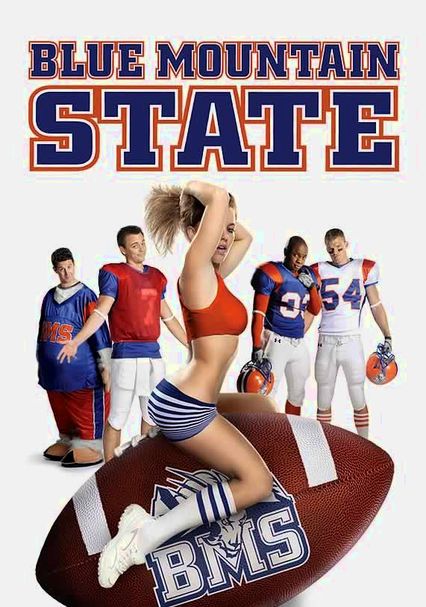 At college football powerhouse Blue Mountain State, quarterback Alex tries to score with coed hotties, running back Craig endures the demands of his controlling girlfriend and ever-horny Sammy strives to be a worthy mascot.

In Season 2 of this comedic, gruff look at campus life at college football powerhouse Blue Mountain State, a letter from a pregnant girl, a revolt by campus nerds and the arrival of his friend's sister wreaks more havoc for star quarterback Alex.

Parents need to know that this raunchy comedy about a college football team follows the Animal House model, in which the "educational experience" seems to center on getting drunk and having sex. The athletes at the center of the series can do no wrong; they trade on their celebrity to engage in casual sex and spend most of their time partying instead of studying. Expect plenty of sex, drinking, drugs, and swearing (including "s--t"). Teens may find the show entertaining, but they won't get anything positive out of watching, and they'll almost certainly take away the wrong idea about university life.

Extremely racy. Guys talk graphically about having sex, and many scenes suggest people engaged in masturbation, threesomes, casual sex, and more. There's some partial nudity (bare buttocks, topless women seen from behind, etc.), several scenes with girls in their underwear, and some scenes showing people entwined; though no genitalia is visible, the images are quite suggestive. Sex is treated as casual recreation. One key character has a long-term girlfriend who takes delight in denying him sex; he's derided for sticking with her instead of breaking up to pursue football groupies. Some hazing scenes feature naked men, in the shower room or in jockstraps, with their backsides clearly visible.

There are some heavy-duty hits on the football field -- and a few scenes feature hazing, intimidation, and trash-talking -- but there's little actual fighting.

The series glorifies the joys of a lifestyle centered around drinking and partying. One character explains that his goal is "to get drunk and laid as often as possible."