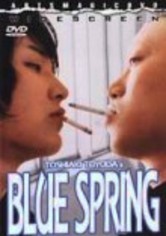 2001 NR 1h 23m DVD
Toshiaki Toyoda directs this moody examination of modern-day adolescence in Japan, a film based on a manga by Taiyo Matsumoto. Soon after being named the new leader of his high school's gang system, Kujo (Ryuhei Matsuda) grows bored with the violence and hatred that surround him. He wants desperately to abandon his post … but his once-enviable position of power has a strange way of making him feel powerless.