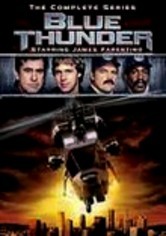 1984 NR 3 discs
This short-lived TV action drama didn't stick around long largely because it coincided with the premiere of the similar -- and more popular -- "Airwolf." Canceled after just 11 episodes, the series follows the airborne adventures of the Blue Thunder helicopter unit, played in part by James Farentino, Dick Butkus, Bubba Smith and a pre-"Saturday Night Live" Dana Carvey. A light tone and lots of high-tech gadgetry make for an entertaining ride.