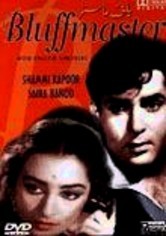 1963 NR 2h 31m DVD
Ashok (Shammi Kapoor) is an immoral gossip columnist who will drag anyone through the mud if it makes for a juicy story. But when he publishes a photo of a young woman (Saira Banu) slapping a man on the street, he finds he's in over his head -- because the subject is his boss's daughter. Now it will take a little creativity for Ashok to save face -- and his job. This screwball comedy features music by acclaimed musical duo Kalyanji and Anandji.