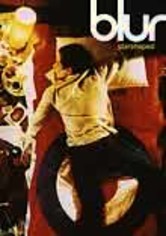 2004 NR 1h 0m DVD
British alternative rockers Blur are captured live onstage, backstage and on the road in this movie that's part concert video, part rockumentary. Shot during Blur's tours for "Leisure" and "Modern Life Is Rubbish" from 1991 to 1994, the film provides a candid look at life on the road and includes concert footage from Glastonbury, two Heineken music festivals and various festivals in Sweden, Denmark and Germany. Songs include "Sing" and "Advert."