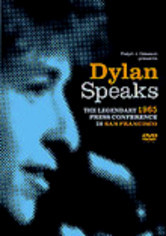 1965 NR 0h 53m DVD
Experience a moment of musical history with singer-songwriter Bob Dylan's 1965 San Francisco press conference, the only one from the era caught on film. Dylan had caused controversy by using an electric guitar at the recent Newport Folk Festival. The move had inspired booing from much of the audience. Earlier that year, Dylan had begun to move away from his folk music origins with his album "Bringing It All Back Home."