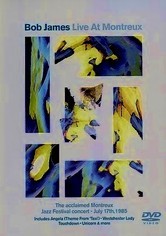 2005 NR 1h 35m DVD
Catch Grammy Award-winning artist Bob James performing live at the 1985 Montreux Jazz Festival in Switzerland, an event that's considered to be among the best ever in the industry and that James recalls as one of the most memorable of his long and illustrious career. Songs featured include "Touchdown," "Ruby, Ruby, Ruby," "Night Crawler," "Unicorn," "Westchester Lady/Lucille," "Zebra Man," "Angela (Theme from Taxi)," "Winding River" and more.