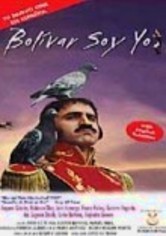 2001 R 1h 33m DVD
Cast as Simón Bolívar on a small-screen sudser detailing the famous general's life and loves, actor Santiago Miranda (Robinson Díaz) thinks the show is exploiting "dramatic license" and storms off the set vowing to revise the scripts to set the record straight. But before you can say "revisionist history," Miranda begins to believe he's the reincarnation of Bolívar in this satirical import also starring Amparo Grisales and Jairo Camargo.