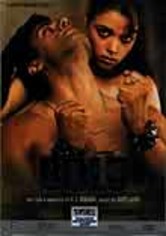 2006 NR 2h 7m DVD
After being brutally raped, Priya (Tanvi Verma, in her feature-film debut) lives her life as the ultimate anti-victim by seducing her attacker and safeguarding others from sharing her fate. Meanwhile, her father (Prem Chopra) wants her to marry a successful industrialist, but she'd much rather marry another. This Bollywood thriller from director K.C. Bokadia made headlines for his leading lady's willingness to bare it all.