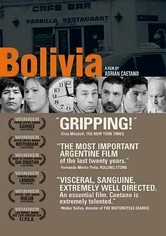 2001 NR 1h 15m DVD
Freddy, a Bolivian exile who's left his loved ones behind to try his luck in Argentina, takes a job as a cook in a Buenos Aires restaurant, where he befriends an odd cast of characters -- including a waitress, a traveling salesman and a pair of taxi drivers -- who become his surrogate family. This intimate drama from filmmaker Adrián Caetano was filmed in three-day intervals over a three-year period, a restriction dictated by budget constraints.