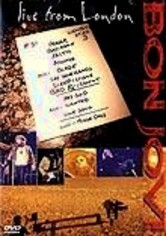 1995 NR 1h 30m DVD
Live from London's Wembley Stadium, this 1995 concert captures stellar rock band Bon Jovi performing some of their best songs before a screaming audience of thousands. Filmed as the acclaimed group kicked off its reunion tour following leader Jon Bon Jovi's solo hiatus, the program features such hits as "Livin' on a Prayer," "You Give Love a Bad Name," "Blaze of Glory" and "Bad Medicine." Behind-the-scenes footage completes the experience.