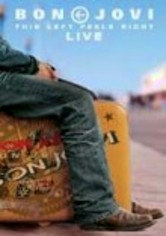 2004 NR 1h 47m DVD
The recrafted versions of Bon Jovi's most popular songs are given new life during two intimate concerts filmed at Borgata Hotel, Casino & Spa in Atlantic City. Tracks include "Love for Sale," "You Give Love a Bad Name," "Wanted Dead or Alive," "Livin' on a Prayer," "It's My Life," "Misunderstood," "Lay Your Hands on Me" and more. Also includes a half-hour of behind-the-scenes documentary footage and a 15-minute Q&A with the band members.