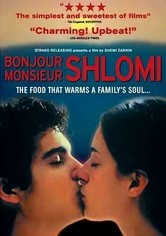 2003 NR 1h 34m DVD
Shlomi is a caretaker of everyone in his family, that is, from his feeble grandfather to his sickly older brother and their disgraced father. Shlomi also cooks each family member's favorite meal to keep them on an even keel. Problem is, Shlomi's pretty much invisible to those he cares for -- until a math test at school catches the attention of Shlomi's teacher, who suspects that a unique personality lies behind that dormant facade.