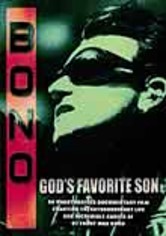 2004 NR 1h 0m DVD
Experience the man behind the music with this documentary about influential rocker (and U2 front man) Bono. Touching on all parts of Bono's life, the film chronicles his early years in Ireland and his first meetings and practice sessions with his band mates to their rise to fame and the massive success U2 has enjoyed over the years. Relying heavily on exclusive footage and never-before-seen photos, it tells the whole story of God's Favorite Son.