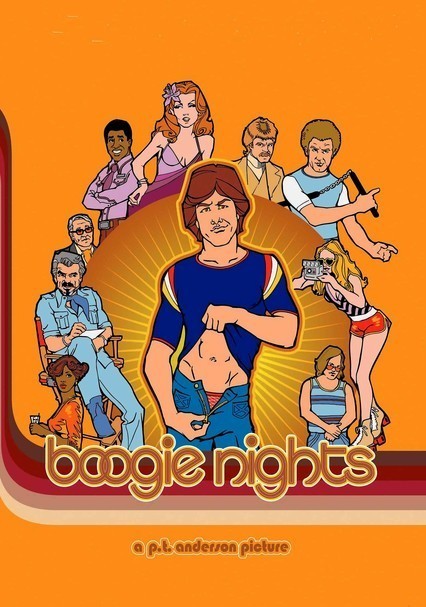 Parents need to know that Boogie Nights is a movie for adults with extensive sexuality, drug use, violence, and vulgar language. Sexual acts (some with full nudity) occur throughout with startling realism. Vivid depictions of drug use and addiction are intense and purposefully wrenching. Characters suffer brutal beatings and are killed both by gunfire and drug overdose (there's no skimping on the bloody aftermath in either instance). Language is harsh and unrelentingly obscene.

Intermittent very violent sequences in which multiple deaths occur: a murder-suicide with the perpetrator shooting himself in the mouth and blood spraying the wall behind him; lots of gunplay and on-camera bullet hits, including one lengthy scene in which a drugged-out man threatens and shoots point-blank at three young men, killing one of them; severe brutal beatings that include head-stomping, kicking, roller skates as weapons, gang attacks. In addition, there are several drug overdoses, with lots of blood pouring from the mouth and nose of the victims.

A cautionary tale. Attempts to put a human face on the desperation and narcissism driving the explosive expansion of the pornography industry in the 1970s and early '80s. The film graphically shows the consequences of self-delusion, frequent drug use, and pleasure-seeking at the expense of decency and morality.

Many scenes of pot, pills, and graphic cocaine use (including more than one bloody coke overdose). A very long scene shows a drug-crazed addict turning very violent. Alcohol flows, drunkenness is rampant. Cigars and cigarettes accompany most scenes.