Book and Sword: The Final Battle 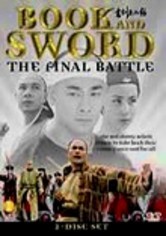 Book and Sword: The Final Battle

2003 NR 1h 30m DVD
Sent into exile after a botched assassination attempt, Chief Chan (Vincent Zhao) -- the leader of the Red Flower Society -- befriends a band of nomads. Soon, he and his ragtag army are ready to storm the capital again. Spectacular swordplay and mind-blowing martial arts are the order of the day in this Hong Kong action flick co-starring Pei-pei Cheng (Crouching Tiger, Hidden Dragon), Ray Lui and Esther Kwan. &NFbThis film spans two discs; both discs will be shipped to you simultaneously.&NFb_;